First, I need to point out the most awesome cover by Cameron Kamenicky and Naomi Lucas, because I didn’t think they could top the cover they made me for The Serpent’s Mate: 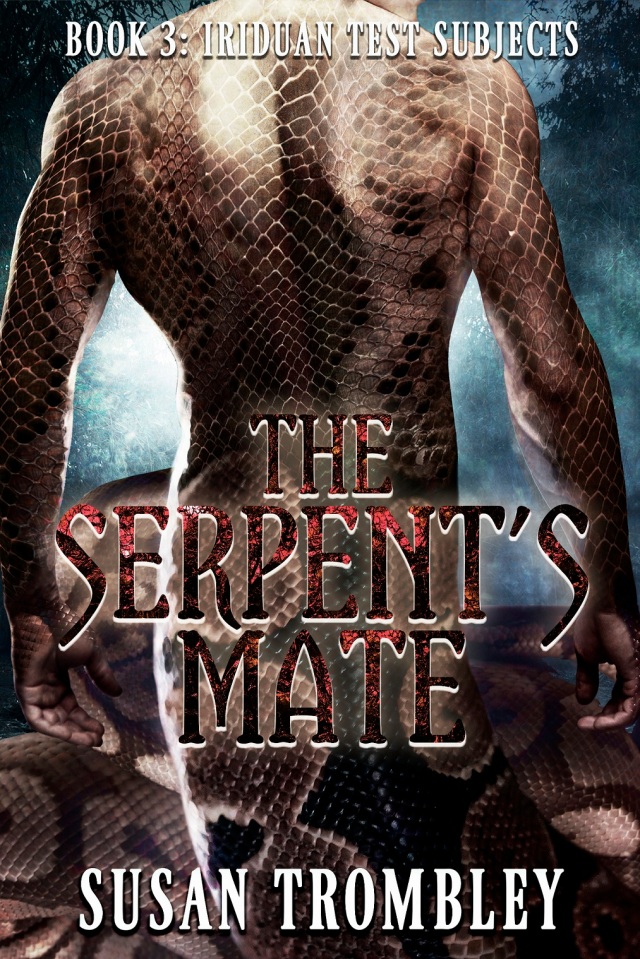 They have designed the coolest, best covers for my books! I don’t want to downplay the work of my other cover designers, because they’ve also done a wonderful job, but it’s just so amazing to be able to say “I’d like to see this impossible image on the cover,” and then ta da! There it is!

Okay, fan-girling over for now (but seriously, check out Naomi Lucas’s books, because I highly recommend them, and I’m a big fan of her cyborg shifter series. She just released a new book in that series that I immediately snatched up!)

Okay, enough delays. On to my blog. 😀

After many months of preparation, I’ve finally had the chance to expand my books, The Scorpion’s Mate and Into the Dead Fall, which were first released as a two-book collection, and break them up into two separate books. I did this for several reasons, but one was so readers could find Into the Dead Fall, because every time I released a new book in the Into the Dead Fall series, readers new to the series couldn’t find the first book.

Hopefully, this will resolve that issue.

I also did this so I could expand Into the Dead Fall and  The Scorpion’s Mate a bit more. I added about twenty thousand words to Into the Dead Fall with additional story that I was going to put into Key to the Dead Fall, but since it was Alice’s story, I figured it didn’t belong in that book, which was about Evie.

Then I was trying to figure out how I would cover that part of the story, until finally coming to the realization that I needed to put it in the first book. I’m very happy with the end result and I hope my readers are too. I think I answered a lot of questions that might have been raised with the first version of that book and addressed some issues that I had left unaddressed previously. Plus, it was just a lot of fun to revisit Alice and her mates.

I wanted to give everyone a chance to read the new versions of these books for free, so I’m running a promotion for two days on Amazon (my books are exclusive to Amazon because I offer them through KU. If you got them at any other site, they’ve been pirated 😦 ).

These are alien romances with very alien heroes, so I know they aren’t for everyone, but they do have an extensive story about falling in love by looking past appearances to the heart and soul inside another person. There are graphic sex scenes as well as graphic violence, so they are intended for readers 18+

So, why do I always stress that my books have heroes that might not be for everyone? After all, shouldn’t I want to promote my books and not discourage any potential readers?

I’ve thought about the fact that I might be scaring someone off who would otherwise love the books by adding those warnings, but at the same time, I want my readers to know what they’re getting into. I prefer to be very straightforward and upfront about what a reader can expect.

All that being said, I know that I tend to push boundaries with my books, but I also work very hard to create a good story with lovable, relatable characters, so if you’re feeling adventurous, picking up a free copy of one or both of these books and trying them out may make you realize you actually aren’t that bothered by romance with aliens that actually look alien. 😀

As for other updates, I haven’t been blogging much (or at all) lately because I’ve been writing like crazy on my novels. I have two manuscripts in the editing phase that are the fourth books in each of the series above: Iriduan Test Subjects and Into the Dead Fall.

The Warrior’s Mate will be releasing soon, and I’m deep in editing and revising that now. Chimera’s Gift will be my next release, which I will tackle once I’ve launched The Warrior’s Mate. After that, I’m about thirty thousand words into a secret project which I’m going to finish for later this year, then I’m planning to begin writing the fourth book in my Shadows in Sanctuary series (no promises on release date for that yet, as it’s not at a stage where I can make those promises.)

Those projects should finish out the year for my releases (but still no promises as things could change–sorry to keep saying that, but I don’t want to disappoint anyone if I have to change course), but not for my WIPs, as I usually try to get some writing in every day, and I have several other projects in the works in some form or another.

I still have two more books I know I’ll be releasing for the Iriduan Test Subjects series, and I’ve already written basic outlines for them. There’s also another book I’ve hinted at and promised for that series that I’ve delayed because it might contain some spoilers for future books in the series. Ava’s book is still coming! I just can’t say when at this point.

I also have at least two more books planned for the Into the Dead Fall series, as well as a book or two more involving characters introduced in that series (maybe even a spin-off involving a certain dimension and species introduced in the second book.)

I have no shortage of projects ready to go, so it’s really only about time, and about which projects will get my devoted attention to finish them first. This largely depends on what I’m in the mood to write next, and that is often determined by how excited my readers are about a specific series or characters. That excitement gets me pumped to work on those projects and gets those creative juices flowing!

That’s not to say I won’t work on pet projects of my own, and I am going to this year. It’s just that all the buzz over a book creates a positive feedback that has my brain working overtime on the next one, so I’m compelled to begin writing it just to quiet that overworking brain. 😀

That’s it for updates and announcements for now. I will try to be better about blogging, but I can’t make any promises. 😉